Android Architecture or Platform Architecture, is divided into Six main sections. This 6 layers stack of the Android operating system provides access, development configuration, and API. You will learn step by step each on in this tutor

Here is the official Android Platform Architecture Image, you can see there are major six layers in Architecture. Every layer has its own function and provides access (interaction or customization) as per development requirements.

Coming to another part where some company is manufacturing Android phones. They want to customize UI and other configuration in Software and hardware-level as per needs, So this Platform Architecture provide all possibilities to do it. 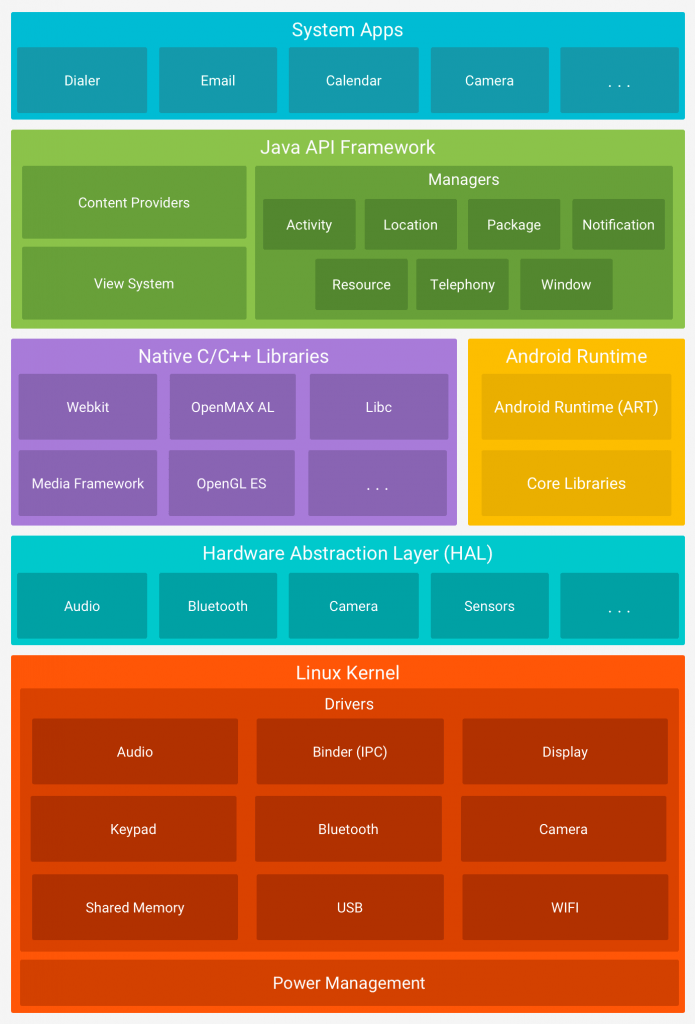 Let’s go to understand every layer of Android Architecture

The Linux Kernel is the bottom-most layer in the Android architecture and an extremely important part of the software on nearly every Android device. Its handles and supports Resource management, Security management, Network stack, Process management, and Power management of the Android system.

Android is Linux-based, it gives the Android developers a pre-built, already maintained operating system kernel to start with so they don’t have to write their own kernel.

Thru HAL you can access Audio, Bluetooth, Camera, Sensors drivers and can use in your application.

Now Android gives you extra flexibility to implement your own device specs and driver, you can create your own hooks between the Android Platform stack and hardware. Android is also open-source, so you can also contribute enhancements.

Android is updating technology day by day to make faster apps. ART- Android Runtime is an application runtime environment. Android apps are stored in memory where they required space. Laughing app go thru the process – stored in RAM memory and execute in short of time, all this supported in Android Runtime configuration by android.

If you are developing an app that requires C or C++ code, you can use the Android NDK to access some of these native platform libraries directly from your native code.

The entire feature-set of the Android OS is available to you through APIs are written in the Java language. These APIs form the building blocks you need to create Android apps by simplifying the reuse of core, modular system components, and services, which include the following:

Android has some default and basic apps in OS, which included some is Internet browsing, Contacts, Calendars, Emails, messaging applications. You can install your own apps, it’s not restricted. Almost all manufacturing company and apps providing own keyboard, google chrome come with Pixel phones and the user also install different browsers. The basic app can be removed from the system if you have root access.

If you don’t like branded apps, you can remove them with some extra effort, sometimes it’s possible to root android mobile, and sometimes not. Root access gives by the company to company on devices (Rooting a device can be done by using some software that is available in the market but still depends on the configuration of mobile). So there is some apps form company like Mi apps by Mi.

From a developer perspective, if your app would like to deliver an SMS message, you don’t need to build that functionality yourself, you can instead invoke whichever SMS app is already installed to deliver a message to the recipient you specify.

Degree in Computer Science and Engineer: App Developer and has multiple Programming languages experience. Enthusiasm for technology & like learning technical.

This site uses Akismet to reduce spam. Learn how your comment data is processed.

[How to Connect App to Web server]